It just occurred to me that my house only has four windows in the entire place. That’s fewer than I had in my bedroom at the last place I lived. And I started to post something about it, basically like what the fuck guys, no wonder I’m in a funk… and then I thought about how that often leads folks to a presumption of ingratitude, wherein an acknowledgement of something that makes you sad is dismissed because look at all these other things that SHOULDN’T make you sad, and why can’t you just shove this heavy thing out of the way to give yourself a better view of the things we think are pretty? And that leads to the remembrance of all the times that people have said, not to me necessarily but just thrown out on social media, that either you are in complete control of your own happiness and are making a decision to be depressed because there is ALWAYS a bright side or that depression is some sort of noble badge you get to wear as a result of having weathered so many of life’s metaphorical storms with strength and grace, and both of those are of course utter bullshit.

Sadness is acute, and you are allowed to have that even when other things don’t make you sad. And depression is pervasive; it gets deep into your head and the reality is that sometimes you cannot see the good and sometimes there really isn’t any good (I swear if you tell me it’s good to just be breathing I will wish a swarm of yellowjackets upon your netherparts) and it’s not about where you’ve been, it’s not a sign of strength or weakness or malignant character, it simply IS. And sometimes there is help, and sometimes you just need to live in that. Sometimes you just need to have acknowledged that yes, there really aren’t enough windows in this place. Tomorrow I will get up and go to work and continue to find joy in many things, but for right this minute, in the midst of all the Christmas lights and joyful kids and central heat and air, let me please be sad about this thing, and let that be okay.

“I’m not good at living with someone,”
she said
looking down at the floor.

And I went home and waited
for the song of tires on gravel
folded myself into him,
a tiny slip
of paper
in his palm.

and all the times we’ve flattered ourselves into
dreaming scars away, wishing lives
into existence
made of fog and manufactured hope
malt liquor and memories
strung charms onto rough hemp rope and graduated
from the bottom of the
middle class to find ourselves
sitting on the crunchy lawn, stomping fire ants and drinking
from the hose because the air inside is thick
with grief and longing
for goodbye

we haven’t learned a thing
since we slipped the noose
umbilicus.

and all the times we’ve flattered ourselves
into forgetting who we were
we crawled inside again
fought the light to find the dark, the cold wet
comfort
of the things we never loved
or loved us back.

I wrote this article last night for Liberal America.  Imagine that you acquired your drivers license and bought a car that you registered, titled, got tags for, had inspected per state regulations, paid the taxes on. And one day as you’re driving down the road, you’re surrounded by police cars with their sirens flashing, voices yelling at you to pull over immediately. Policemen point guns at your children and order them out of the car. You’re arrested for driving without a license, with no tags or registration. Your car is impounded and you’re facing jail time. That kind of injustice is what this case is about. Todd Stimson is facing prison time for running a business that he had been given permission, by the state, to run. It doesn’t matter what your opinion is about marijuana, medical or otherwise. What matters is that the state is attempting to imprison someone for doing something they said he could do.

The link to the full story for Liberal America is below, along with a link to a brief video of Todd Stimson talking about his family’s ordeal. 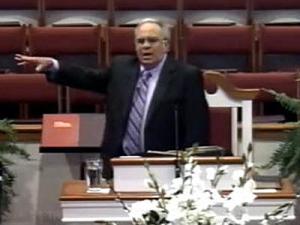 Charles Worley is an asshole. The pastor of Providence Road Baptist Church in the tiny town of Maiden, NC–an hour and a half from where I’m sitting right now, lucky me–has been all over Youtube the past few days, spouting his ridiculous theory of how to get rid of the gays, lez-beans, quairs and homaseckshulls [sic]. In case you missed it, here’s a video of that portion of the sermon.

So passionate, so eloquent, so what the fuck does this nutjob put in his coffee in the morning? Seriously, for a guy who no doubt believes that evolution is some conspiracy theory made up by Satan to entice sinners to have sex with aliens, he’s doing an awful lot of shit-flinging, just like his simian relatives like to do.

Mister Worley’s idea, in case you’re like me and see a video link and think, damn, I’m too lazy to click on that, is to put all the lez-beans, quairs and homaseckshulls into electrified pens, drop food into the pens, and wait for them all to die out, which will inevitably happen since “they cain’t ray-produce!”

One thing that’s really important to note here is that Mister Worley is not representative of all Christians, or all Baptists, for that matter. My old friend, Pastor Kevin Boone-a Baptist minister himself-expressed his concerns about this psychotic rant: “Two groups of people equally concern me/scare me: those who think like [Charles Worley] and those who think that greater Christendom think like [Worley].” I’ve heard from several people, Baptists, people who voted for Amendment One even, who are as appalled by Worley’s behavior as I am. The fact that he’s in the minority is kind of irrelevant, though. Mister Worley is advocating killing human beings for no reason other than that they exist. He’s advocating this in the name of his religion, and people are listening to him. We look at Charles Manson and Jim Jones and see monsters; is Worley any less so because he calls for murder under the cover of an established and socially acceptable religion?

I want to go to Providence Road Baptist Church and start a dialogue with this guy, but I don’t think he’d listen. I have a feeling he’d take one look at me, smell dissidence on me the way dogs can smell fear, and sic the congregation on me with torches and clubs. I am not a lez-bean, a quair or a homaseckshull, but I believe in their right to exist, and that’s clearly something Mister Worley has a problem with, to the point of advocating mass murder. I don’t know what kind of psychiatric issues this guy has, but he clearly needs to either start taking his meds, get on some new ones, or up the dosage, because what he’s saying is straight-up batshit crazy.

To love is not a privilege or even a right, but an inherent trait, like the ability to breathe.

If you believe that god breathed his breath into your existence, then you must also believe that he loved your love into existence. To try to deny anyone the ability to love, freely and openly and in the same manner that all other adult humans are able to love, is to attempt to deny them the right to breathe; in effect, you are assuming the role of the god you claim loves all, sees all, created all-but created this love by mistake.

Do you equate your government with your god? Why then did you visit the courthouse for your marriage license and the church for the ceremony celebrating your commitment? If they are one and the same, why do you require the services of both a magistrate and a minister?

I’m aware that our government spends far more on death and violence than on food, education and healthcare. Our government rests on a foundation of greed and narcissism, power and control. None of those things have anything to do with love. On the edge of sleep, I promise the man beside me that this is forever, and he promises the same to me. There is no need to ask a corrupt government permission to make these promises. If there is a god and he sees everything, he hears our words, sees the love he created, and approves-even without the sanction of the secular government. Would your god deny a man and a woman the ability to love and to be loved by the children they’re raising, because we don’t believe in war and greed, and don’t want to associate our love with those malignant traits?

Where in your bible does it say that you have the right to judge anyone at all?

i feel as if
amendment one
is being read by the light of a bulb
shining through the skins
of my family, friends-
my children.

how can you cry your careful,
scripted tears over the loss of a life
not yet started
and tell the child before you
that his life means less than yours?

pro-life, and yet you spit
your prejudice and bile into the faces of your neighbors
fight to take away
their right to life

wine-drunk in the mornings
cannibalizing christ and if his body was inside you
you would see where you are wrong.

slave-owner, whore
if i were bible-bound like you
i could whip you while you cleaned my floors
then sell you for your meat
so your body could be violated
like your conscience must have been.

What happens if amendment one passes:

1: Homos run amok, using their incredible mind control powers to hypnotize all the heteros and force them to marry in the same bigoted backwoods churches that sentenced them to hell for putting their wieners on other boys’ wieners. (Lesbians are ok, per most clergy. They got that shit on Cinemax late at night and it’s pretty hot. But still, gay is gay, so they can’t marry-but they can keep doing it on TV.)

2. Homos can’t reproduce, so they must acquire their children from China. All of these Chinese babies turn gay, because homo parents raise homo babies, and vice versa. (Don’t ask me how all the gay people got here in the first place. This isn’t the time or place for logic, folks.) Chinese homo married couples have to adopt more Chinese babies. America turns into China. No more “America Bless God” bumper stickers on SUV’s. Chaos ensues.

Obviously, gay marriage really IS the downfall of America.

Of course, if this was the time and place for logic, what would happen is that gay people would be allowed to get married just like straight people can, and our government wouldn’t look like a bunch of inbred perverts who care more about where your dick spent last night than the fact that more than one in four children in this state are living in poverty. They may be hungry, but at least they won’t grow up and marry a got-dang homo. Priorities, people, right?