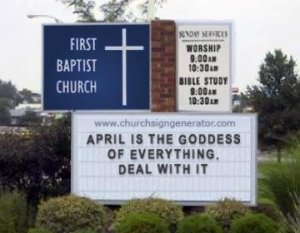 There used to be kind of a running joke between me and my friends: “Ape is the goddess of everything.” Hardly a unique thought, not even clever, but it was tongue-in-cheek and injected a little bit of silliness into life’s most heartbreaking and tragic situations. “What do you mean they’re out of cheese danish? Don’t they know you’re the goddess of everything and need your cheese danish?”

And then I became aware of the Goddess Phenomenon, and my snarky little joke was no longer a source of necessary smirkage. It lost its identity to the Yoni Worshippers and had to be put down. It was a quick and painless death, since it never meant that much to me anyway, but the knowledge of why it had to die still haunts me.

If you’re unaware of the Goddess Phenomenon, first, be thankful and second, please tell me where you live so that I can move there. Don’t get me wrong, I’m all about equality for women. Equal pay, hell yes. Quit objectifying us? Meh. I can tolerate some good-natured objectifying once in a while, if the right person is doing it. If you’re a woman who did something extraordinary, be proud, be vocal about that shit. If you scaled Mount Everest, you’re a goddess among women. If you adopted a bunch of unwanted kids, goddess. Started a charity to feed homelesss people, goddess. Rescued a kitten from a well, you’re all kinds of goddess. I have a couple of dear friends who are kicking cancer’s ass while still taking care of their homes and their families. That, my dears, makes them goddesses.

If you emerged from the womb with a vagina, this does not make you a goddess. Sorry ’bout that. It just doesn’t.

I may catch all kinds of hell from my feminist friends for this post. It’s not that I’m anti-feminist or anything like that; I mean I tell my kid that all those Disney Princess stories are dumb, and I don’t let her play with those little hooker dolls, Bratz or whatever they are, and not just because I automatically boycott the shit out of anything that pluralizes itself by adding a final Z. [Barbie is a different story, though. Barbie fucking rocks. Who says you can’t be gorgeous and smart and accomplished and dump your lifelong husband for a young surfer dude? Hell-o, people, Barbie is the ultimate fierce bitch. If you want your kid to have a plastic role model, Barbie is a million times better than Hannah Montana or Sarah Palin.] Anyway, I digress. I’m not anti-feminist or anti-woman. I’m anti-acting like a self-absorbed, entitled twat because you have, well… yeah. If you want to be respected, do something. I mean, if you’re bent on being respected for your yoni, that’s really neat, but you have to do something with it, you know? Pop a surrogate kid out of it, or become a product tester for totally biodegradable, all-natural, made from recycled tires and sustainable hemp tampons, or something. Be a yoni with a purpose, and then maybe you’ll earn that goddess status.

Until then, you’re just a cranky bitch with a computer, like me.

5 comments on “Why I Hate the Goddess Phenomenon, or, How to be More than Just a Yoni”