We were victimized recently, no doubt part of a much larger crime spree going on right under our very noses in our quiet little suburban town. Beloved’s bicycle was stolen from our front yard sometime in the past couple days.

You know what kind of people steal bikes from people’s yards? Not very nice ones. The kind of people who kick puppies and make new waitresses cry. People who steal bicycles need their mamas slapped, cause they should know better. Really.

Our criminals weren’t very smart, though. About twenty minutes after he discovered that the bike was gone, thing two found it. He’d taken the dog for a walk and spotted the bike, half-hidden under a tarp in a neighbor’s yard on the next street over. He was breathless with the news, dying to see what would happen next. I didn’t know what to do. If I walked over there to make sure it was the bike, the crooks might recognize me and abscond with the loot to someplace less visible. [Not that there was any question about whether it was the missing bike, really; thing two is to bikes what Stephen Hawking is to the universe. You don’t question anything he says on the subject.] I didn’t really want to call the cops, in case it was just some dumb kid that took it and besides, I’m not a fan of getting the police involved unless it’s something really major. You do your thing with your handcuffs, copper, I’ll do my thing with mine, and we don’t need to know anything about each other, is the way I look at it. Finally, beloved decided he was just going to go over and take his bike back. “What are they going to do,” he said, “Call the cops on me for taking back the bike they stole?”

I’m thinking cool, he’ll walk over and get his bike and it will be done. Except that our friend wanted to go along for backup. And of course thing two had to go, to point out the right house. And then baby girl wanted to go, but she didn’t want to be the only girl, so I had to go, and then naturally, since we were all going, thing one went too.

“I feel like the Outsiders or something,” I told beloved, “Marching over there to defend our turf.”

I’m pretty sure the Outsiders didn’t put on big sunglasses and pose for the camera before they went out and kicked ass, though. 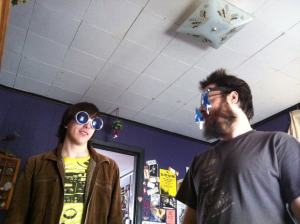 So off we went, all badass, skipping up the road-yes, skipping-to retrieve the missing bicycle. It was a beautiful day, 70 degrees on the first day of March, and we were all in fine spirits. Soon enough, we were in front of a dilapidated trailer, with several bicycles parked on either side of the front door. A familiar pair of handlebars poked out from under a tarp. “It looks like my bike,” beloved said, before lifting the heavy plastic.

“Is the chain rusty?”

“This is definitely my bike,” said beloved, wheeling it away from the trailer. He handed it off to me, and he and our friend stepped onto the porch. The tiny window in the door slid open a few minutes after beloved knocked.

The window responded that it didn’t speak English.

This made the whole vigilante thing far less melodramatic than it could have been.

“Bike,” beloved told the window, pointing toward the recovered loot. “Mine,” he said. Apparently satisfied that the window understood, he took his bike and we headed home.

Once home, I did what everyone does when they walk in the door-I checked my Facebook. I saw that beloved had posted a status update earlier, asking people whether they thought he should call the cops or just go get the bike. This apparently provoked what passed for deep philosophical thought in one of his friends. She was concerned about “bad energy” created by calling the police or recovering the bike. People are dangerous! she worried. You could get hurt! “Be humble,” she implored him.

Humble? That didn’t even make sense. Humble, my sweet pink booty. Having some cretin come onto my property and take my stuff [well, beloved’s stuff; close enough] isn’t a humbling experience. It’s a what the fuck, stay out of my yard and give me my stuff back experience. Still, I was amused by her dramatic interpretation of the situation. Did she expect people to be defending this old, flat-tired bicycle with machine guns? If they find out we took it back, will we be sleeping with the fishes? And how on earth does bad energy come into this? I really wanted to throw a car chase or two into this story, maybe a dead hooker or something, or an evil medium-for the bad energy, you know-but I just couldn’t make it work.

All I had were a couple of dorks in big sunglasses and a window that didn’t speak English. Maybe next time…