I’m supposed to be writing about Valentines Day. I need to write about it so that Google will love me and people will read me and I’ll become popular and pretentious and rich as a mofo and never have to work again-but I can’t come up with anything to say. You know the usual arguments against the holiday, so I won’t bore you with those. I don’t buy the conspiracy notion that the holiday was created to make single folks feel bad about themselves; unless you’re gay and they’re a politician, nobody really cares whether or not you’re getting laid. I do like the idea of having  a day officially dedicated to love when there’s so much negativity in the world, but what else is there to say about that? Nothing, at least not at two in the morning when I’m wishing that I was eating leftover manicotti and snuggling with my beloved rather than staring at this damn computer, trying to come up with something to say about love.

It should be easy, writing about love. I’m surrounded by it every day. We’ve lived together for a while now, long enough that people act surprised that we’re not bored or fed up or complacent with our relationship. I get the same little flip in my stomach when he walks through the door at night and asks what I want to watch on Netflix that I did when I saw him twice a week and he’d ask me where I wanted to go when we went out. There is something about his presence in my doorway-our doorway, now-that’s always made me feel safe and comfortable, lucky to be not just here, but here.

This makes no sense, but it makes perfect sense.

The beginning of us was like a John Hughes film for grown-ups. He was the handsome, scruffy musician on stage in a silly hat; I was the obligatory quirky girl in the audience half-wishing I was somewhere else. I had to talk to him; I was writing a story about the band he was in with a couple of my friends, so I emailed them all. He split his reply off from the others, and that cursory, polite message that I sent turned into months of conversation. He hates the phone, but we talked for hours. I hate crowds, but I went to see him play again. We were both a little gun-shy and cautious, but there was a blanket and a glass of wine and I fell in love with his hands the first time that I held them.

We are the way I wake up with his feet on mine every morning, and the way I can’t get up without him trying at least once, in his sleep, to keep me there. We are finding which stars we’re under, just because we need to know; slow kisses at the STS9 show; smiles from the stage reassuring me that I’m okay there watching him, even with all the strangers there. We are a house divided, boys playing games in the living room, girls painting nails in the bedroom, laughter overlapping and taking over the house. We are silence and knowing without saying exactly who we are, and where, and why.

There are a million little things he does that make me love him, and I kind of want to keep those close for now. Someday-when we’ve been married fifty years, maybe-I’ll tell you what they are.

And I don’t understand why, with all of this love around, I can’t think of anything to write. Maybe next year. 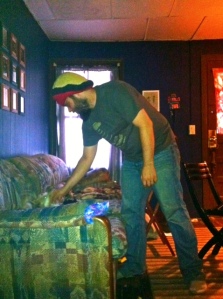 My favorite recent photo of beloved